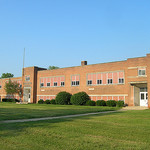 It was late fall during my 5th grade year of elementary school and my closest friend from class suggested that I try out for the basketball team with him and some of our other classmates. Now, I had shot around a couple times on a 6-foot hoop that my neighbors had nailed to their tree, but had never played in even a pick up game of basketball at that point in my life.

So I agreed to try out and was actually quite excited about it. On the day of the tryout is when I first met Coach Roy Glass who would lead the Fall-Meyer Falcons boy’s basketball team that year. Since there was only one team for the entire school, at the start of the tryout Coach Glass informed the group of eager young boys that the team would consist of six 6th graders, four 5th graders, and two 4th graders, giving each grade an opportunity to be represented on the 12 person roster.

Fast forward to the end of the 2nd day of tryouts when Coach Glass announced the 6th graders who would make the team and then the 4th graders who would make the team followed by 3 fifth graders to make the roster. He then named a couple other 5th graders who would not make the team but my name had still not been called. 11 roster spots filled, several others sent home and just me and another boy left in the gym with the coaches. That is when Coach Glass said, “its so even between you two that we cannot decide who to keep for the last spot on the team, so we have decided to let you play 1-on-1 to 5 points. Each basket is worth one point. The winner will make the team and the other person can try out again next year.” I was so nervous and unsure if I could beat my opponent, but had no other choice than to give my best. I ended up winning the game 5 to 0 and earning a spot on the team and just when I thought I had overcome the biggest hurdle to make the team, the hard part had just begun.

As I mentioned I had never played before, though I stood at 4’11” which was pretty tall for my age, it was my first time dribbling, playing with defense or having to use my left hand. Each day practice would start with a lay-up drill where each player had to make a lay-up from both the right and then the left side before we could move on and Coach Glass insisted on everyone using the correct hand. Every time someone missed, the entire team would have to run a sprint and then start over. Well, lets just say I contributed to the first drill in practice being quite lengthy many times as I will guestimate that I typically made about 60% of my right hand lay-ups and only 30% of my left hand lay-ups over those first couple weeks.

No matter how much I had to run or get hollered at by coach, I was always excited to go back to practice and never wanted the session to end. It was weird; from early on I was addicted to practices and learning about the game even though I wasn’t very good at it. It was really the first thing that I ever participated in that I wasn’t naturally pretty good at. School came relatively easy, I was a social butterfly, and I always did reasonable well with the other sports and activities that I participated in. However, I was so behind the other kids in basketball that I was often times lost out on the court, but the more I struggled the more I had a desire to get good at this game.

So as the season progressed, though I did get slightly better, I rarely saw any playing time and was always one of the last two guys pick when splitting up teams in practice. We were a middle of the pack team and had an average record and after the regular season completed we were the underdog in our first round tournament game. As the fourth quarter of that game was ready to begin, we were down significantly on the score board so coach put myself and another guy in the game who had yet to score a point in a game that season and instructed the other three guys to work to get us a shot. My fellow scoreless teammate knocked in a 12-foot jump shot for his first basket of the season but with two minutes left in our season, I had yet to score. I finally got a shot attempt with less than a minute to go in the game and was fouled. I split the pair of free throws and ended my first basketball season with 1 point in the scorebook, all because of Coach Glass’ plan to get everybody a basket.

I begged for a basketball hoop for Christmas that year and of course Santa delivered. Once it was installed that spring, I practice on my shot and ball handling every day in the driveway and tried to coerce every kid in the neighborhood to come play. I improved so much that by my 6th grade season, was one of the top 2-3 players on the team. As a matter of fact, we had a 15 minutes scrimmage to start the season, and though we got beat pretty good, 18-6, I scored all of our teams points.

I continued to love the game of basketball all the way through high school and was fortunate enough to have the opportunity to play in college. If I wasn’t playing basketball, doing drills, or lifting weights, I was watching basketball, reading about it or talking about it with others. Basketball consumed my life!

As a result of this passion, I went on to make a career out of basketball. I have spent all of my adult life working within the realm of basketball. I have coached at the high school, AAU, Division I college, and professional ranks. I have had the opportunity to work in TV, radio, and am currently and NBA Advanced Scout all because of this awesome game.

This game has taken me across the country and back numerous times, and rewarded me with friends and colleagues around the world. I have had the privilege to meet cultural icons spanning from Muhammad Ali to John Wooden, spend time with celebrities ranging from Denzel Washington to Snoop Dogg and cross paths with some of the greatest athletes in the world like Jerry Rice, Serena Williams, and LeBron James all because of basketball!

I love the game of basketball very much, but I often wonder where I would be or what I would have done with my life if I had lost that game to 5?? What if Coach Glass just chose the other player instead of me for the last roster spot??

Coach Glass gave me an opportunity and which allowed a passion to blossom within me. Being apart of the Falcons basketball team during my 5th grade year was one of the first real pieces of adversity that I had ever faced and I used that to motivate me to work and strive to achieve more. Coach didn’t even know it at the time, nor did I, but the opportunity he allowed me, helped lay the foundation for who I am today!   If that night at try-outs had ended any differently, my whole life may be different today!

I am extremely grateful and appreciative for the privilege of wearing the Fall-Meyer jersey back as a gangly 5th grader.   I played such a minuscule roll on that team, but that team played a vital roll in the next 25 years of my life and I am sure will continue to be a moment in time that I will always look back at as one of many defining points of my youth.

Most people would view being the 12th man and only scoring one point all season as the glass being half empty, but for me; playing for Roy Glass helped me discover the drive necessary to keep my glass full to the top!